I'm a little ambivalent with regard to weather vanes. For a start they tend to be quite a long way away and unlike coal holes you can't get up close to capture the details. Add to that the fact that my humble snapper doesn't have much of a zoom and they start to feel rather elusive.
As a practical tool they're a little suspect as well, right up there with sun-dials on the 'am I reading this correctly?' scale of disbelief so I think you have to look at them as really being basically objects of ornamentation with a slightly spurious claim to practicality.
Still, there are loads of them out there of various shapes and designs and you really can't ignore them for too long

Wimbledon Village SW19 Here's a fine traditional design to kick off with. I believe, although I might well be wrong, that this is a design based on a comet or shooting star. Not any old comet of course, but Halley's comet as depicted in the Bayeaux tapestry. Could it have found favour as a reminder of the wandering star leading the Wise Men to the Nativity? 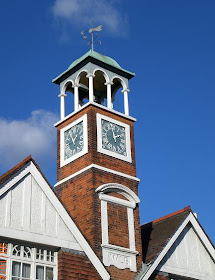 Barnes High Street Another traditional design this time in the shape of a cloth banner. The word 'Vane' apparently comes from the Anglo-Saxon 'Fane' a type of flag, so this sort of design is probably based on the original. This particular example looks as though it's been through the wars a bit and is about ready for a bit of patching up. 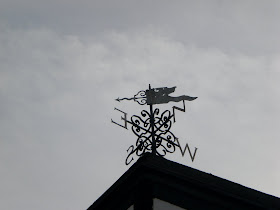 Wimbledon Village provides another classic design, this time the Weather Cock. This is the archetypal image to sit on top of a weathervane and this is a nice three-dimensional copper version. 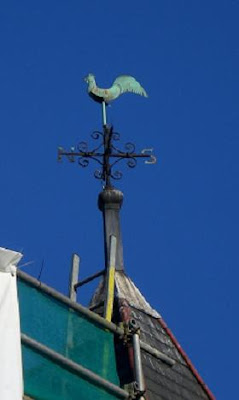 The popularity of weathervanes exploded when a papal edict from the 9th century A.D. help bring the weathervane to the skies of most of Europe. Rome declared that every church in Christendom must be adorned by a cockerel, a symbol to remind Christians of Peter’s betrayal of Christ: "I tell thee, Peter, the cock shall not crow this day, before that thou shalt thrice deny that thou knowest me." (Luke 22:34)

Arrows would seem to be the clearest indicator of wind direction so it's no surprise to find a few variations on this particular theme and these make up the last of the 'traditional' designs.

Kingston-upon-Thames With new riverside developments going up over recent years weather vanes are an obvious bit of decoration to try to give them a bit of instant 'character'. I'm not sure I'd of bothered with this one though as 'bland and forgettable are the words that spring to mind. Almost the sort of weather vane you might buy down the local DIY store one Sunday afternoon. 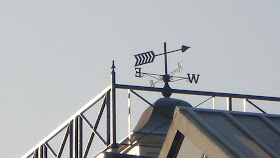 Bermondsey There you go, all that's required is a little imagination. It may be a simple arrow but the 'leaf-spring' effect and the attractive palm leaf base puts it into a different league to the sad effort above. 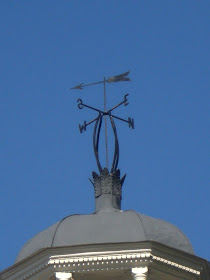 Raynes Park A very ornate pillar with a very curious shape to the vane. I'm not sure that it depicts anything and it doesn't seem to be the clearest example to try and read. In fact it's quite busy' and dense up there... 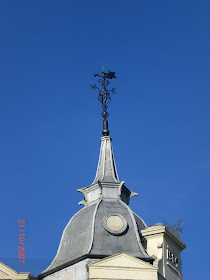 Fulham Road That's more like it. Stick it up as high as you can get it; make it exceptionally delicate; add needle-sharp spikes and you've something that starts to resemble old drawings of radio transmitters! 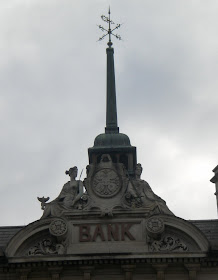 Lavender Hill, Battersea A whole new sub-set of 'vanes that put the vain in weathervane'. There are quite a few examples out there of vanes heralding the company beneath them and the fact that many of these companies have ceased to exist make these classic 'Faded London' territory. I'll be keeping my eyes peeled for more examples and maybe I'll even find out who W&Co. might have been. 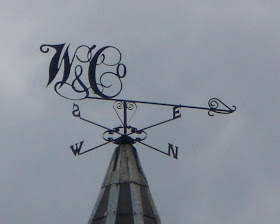 On now to a series of themed or 'novelty' weather vanes. As these vanes are a means of adding a bit of personality to the building it's no great surprise to find that the designs often reflect either the local environment or an owners particular hobby.

One thing that seems to pop up as a regular topic on weather vanes is that of water and various associations with it. Most, but not all of these can be put down to location such as the one below

Old Stable Block, Morden Hall Park Well you might reasonably have expected a horse on a stable block, but the River Wandle runs about five yards from its walls. At one point regarded as one of the finest trout streams in the land even Nelson with one arm managed to catch a few, so up on top sits a trout. 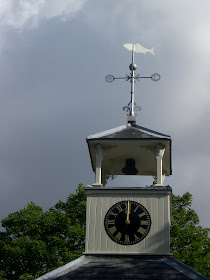 Morden Hall, Morden The local 'Big House' also has the Wandle running through it and has also went for the trout theme. I'm not sure which of the two looks most trout-like though 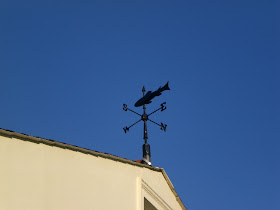 Parkside Avenue, Wimbledon Common Straying slightly from the fish this attractive three-dimensional dolphin was on top of what looked like an extension in the garden. No obvious connection here so was the choice influenced by a personal connection or was it just down to the aesthetic appeal? 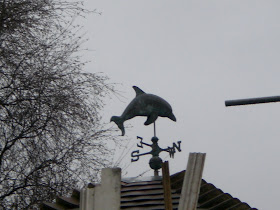 The Grange, Wimbledon The Common does have a boating lake but I'd guess the owner has an affinity with slightly larger craft than this one. Slightly odd to see it on top of the garage though. 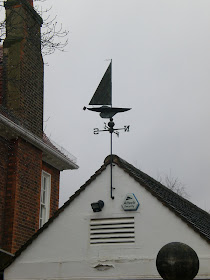 River Bank, East Molesey Similar to the above, being right next to the Thames is obviously the inspiration for this one 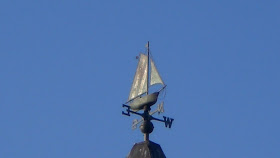 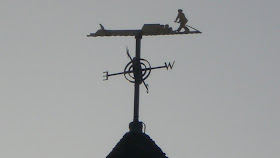 OK, picture the scene. It's dusk and in the twilight, far off in the distance, you see a distinctive weather vane flushed out of the Autumnal mist. You take a shot anyway and hope for the best. That's how I ended up with this dark, blurred image of a grouse rising above the rooftops of Roehampton Vale, Richmond Park. 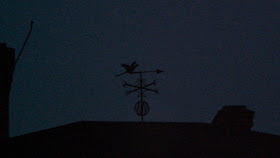 Brodrick Road, Wandsworth SW17 Quirky ones. There had to be some. This is presumably a day-nursery or a home with loads of children 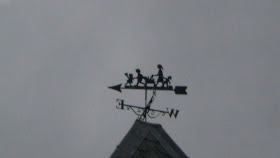 Epsom Road, Merton At the other end of the chronological scale this old couple sit on top of a retirement home. 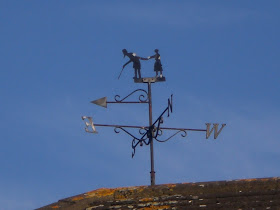 To finish on, how about a couple of mythical creatures?
Kingston Road, Wimbledon Chase This wyvern seems to have take a bit of a battering and his wind directional days are long beyond him, if in fact he was ever a wind vane at all. He's too good to leave out though so I've given him the benefit of the doubt 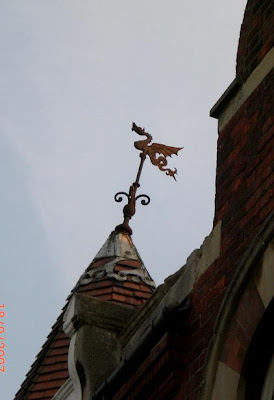 Howards Lane, Putney SW15 And finally, leaving the best until last, how about this magnificent and by far the largest weather vane included to date. This ferocious beast sits on top of a private house and glares at you over the tree-tops as you drive by and is ornamentation on a grand scale. If he also tells which way the wind's blowing then that's just a bonus... 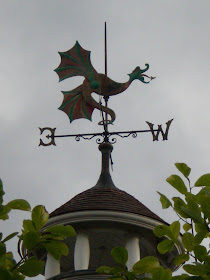